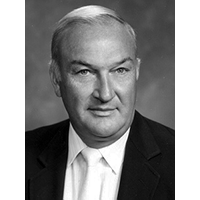 Following an outstanding high school career at Boardman High School and college effort at Baldwin Wallace in basketball and baseball, Coach Burns started his coaching career at Olmsted Falls with a 4-14 record. This was to be the only one of three seasons below .500 in 27 years as basketball coach. After serving as an assistant coach, he became Boardman's head coach in 1965. His team went 16-4 winning the Steel Valley Conference. Burns served as head coach at Boardman for 26 seasons, winning 376 and losing 177. They were SBVC champions nine times, eight times as sectional champs, and district winners five times. They were regional champs once, leading them to the Final Four in Columbus.

Not many Ohio teams have had such a fantastic run as Boardman had for seven seasons, from the 1968-69 through 1974-75. These Spartan teams were 138 and 22, including the 23-1 season in 1970-71. Boardman played against most of the best teams in Ohio and western Pennsylvania. Outstanding quintets, with Greg Dunn and Jay Powell in the early 1970's, rank among an elite top ten group of scholastic hoop units in Ohio. Boardman athletes such as Dave Dravecky and Bernie Kosar brought additional fame to Boardman. Four time Burns was Coach of the Year of the Mahoning Valley and Northeastern District. He is a member of the Boardman High School Hall of Fame, as well as the Curbstone Coaches Hall of Fame.

His basketball philosophy was make all your players and friends feel that there is something special in them. Give respect to everyone, and in turn you may demand respect from all. Work hard, work together, and good things will happen. Never forget the element of simple fun in all that you do.

He has been married for 36 years to his high school sweetheart, Nancy, and they have three children: daughter Terry and sons Bruce and Allen, who were outstanding performers on their father's Spartan basketball teams. He received a Master's degree in biology from Southern University in Baton Rouge, Louisiana, where he worked several summers while going to school, typical of his great perseverance. He taught biology at Boardman High School for 30 years and as athletic director for the past five years.

Burns has been a basketball innovator, being the first in the area to offer basketball day camps and open gyms. Basketball has been the love of his lifetime and he has devoted himself to it, bringing credit to his family, school, and community over many years.