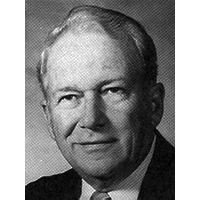 Arch Justus graduated from Bloom Local High School, South Webster, Ohio in 1946. He received a Bachelor of Science Degree in Mathematics from Cedarville College in 1950 and a Master's Degree in School Administration from Morehead State University in 1968. Arch participated in basketball and baseball both in high school and college.

Coach Justus returned to Portsmouth Clay in 1958 and remained there for 25 years. He also coached a year at Minford in 1983-84. After his retirement from active duties in school administration in 1983, he complete his coaching career at Lucasville Valley where his cherished 500th win was recorded in January 1986.

During 33 years of active coaching, Justus' teams compiled a record of 532 wins and 220 losses, including 18 league/conference titles, 20 county/sectional and six district tournament championships. His teams appeared in four regional finals and one state tournament in 1969. He serves as a member of the South coaching staff in the 1969 North-South All-Star game. He was also selected SE District Coach of the Year three times, and received the Life Member Award in 1987 to the Naismith Memorial Hall of Fame. Arch had the unusual experience of serving as a head basketball coach while serving as a math teacher, a high school principal, a local superintendent and after his retirement as a school administrator!

His coaching philosophy was In coaching there is no 'secret method' to use. Sometimes we forget where an idea came from, but take what works best for an individual and move forward from there.