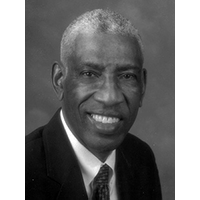 For anyone who has followed Ohio's high school basketball in the past 25 years, the name of Ben Williams and his successful program at Toledo Scott High School are familiar. He and his program are synonymous with basketball success across the state. Williams played successful high school basketball at Woodward High School before his graduation in 1955. He played on a basketball scholarship at BGSU, under the legendary Harold Anderson. The 6' 3" forward was an integral member of the 1959 MAC championship team.

Following his college graduation, Williams worked as a youth director for eight years in Pennsylvania and Toledo. In 1968 he joined the staff at his alma mater, Woodward High School, teaching science and assisting with the basketball team. A year later he moved to Scott High School. Within four years, he was head basketball coach and for 24 years he put up some amazing numbers - 429 wins and 120 losses, for a winning 78.1 percent. That is an average yearly record of 18-5, with a very tough Division I schedule.  1990 was his crowing moment and finest season. His Bulldogs team went 27-1, and captured the state championship. That team was eighth nationally in the final USA Today High School Basketball Poll.

Williams' teams won eleven city league, nine district and five regional titles. He has had eleven All-State Players, four High School All-Americans, one Ohio High School Player of the Year, and one College All-American. As important to Williams was the fact that during those 24 seasons, 90 percent of his players would graduate and attend college.

He has received many honors, including the Bowling Green State University "Distinguished Alumnus Award." His most notable tribute came in 1990 when the Scott basketball gymnasium was renamed the "Ben W. Williams Fieldhouse."

Since his retirement, he has continued to serve needy youth. In 1998 he and other supporters organized the Ben Williams Youth Services, sponsoring enrichment programs, basketball activities and academic scholarships for economically disadvantaged students. He and his wife Arielle have two daughters, Kristie and Leah, and a married son, Robert Williams.

Williams nominators say of him:  "He is and was much more than a basketball coach."  Also, "he not only instills a basketball discipline in his players, but he carries that discipline over to everyday life for the kids." His philosophy is that to be productive you must work diligently at any job responsibility that you accept.