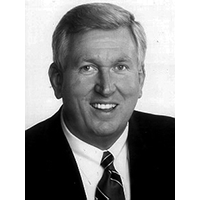 Since the inception of the OHSBCA Hall of Fame in 1987, we have inducted nine as honorary members. Bill is the tenth person to be awarded this honor. All of these Hall of Famers have contributed so much to basketball, either as coaches, players, administrators or as promoters of the game.

Bill followed in his late father’s footsteps and went on to Ohio State. While at OSU, he was named All Big Ten and All-American and also captained the Big Ten Championship in 1968, plus a third place finish in the NCAA Final Four. During his OSU career, Bill led team in scoring and rebounding in all three of his varsity seasons - joining only the great Jerry Lucas to accomplish this feat in Ohio State history. Upon graduation, Bill left Ohio State as the school’s number four all-time scorer and its number two career rebounder.

During his three year varsity career, Hosket was named first team All Big Ten Academic each season and has the distinction of being the school’s first ever Academic All-American. His senior year he was awarded the Big Ten’s Medal of Honor recognizing achievement in both athletics and academics.

In the fall of 1968, Bill was also part of the 1968 Olympic Basketball team that went undefeated in Mexico City winning the gold medal. He was drafted in the first round by the New York Knicks and was a member of the 1970 NBA World Championship Team.

After professional basketball, Bill began a 30-year career in the paper industry but never totally left the sport of basketball. He served three terms on the US Olympic Basketball Committee, co-founded and conducted Buckeye Basketball Camp (most recently at Denison University) for over 25 years, and continues to provide analysis on ESPN Regional Television Big Ten package.

Bill is a member of the OSU Hall of Fame, was named in 1993 to the National Association of Basketball Coaches Silver Anniversary team and also was honored in 2002 by the Ohio High School Athletic Association with its highest honor - the Ethics and Integrity Award.

In 1998, Bill was named as the President of the OHSAA Foundation and today serves as the Foundation’s first executive director. Bill and his wife Patty have three grown sons and reside in Columbus.