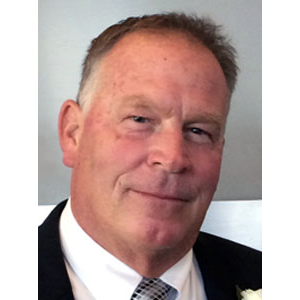 A native of Willowick and a member of the Greater Cleveland Sports Hall of fame, Bob Beutel attended Eastlake North High School (class of 1968) where he excelled in football and basketball, earning All-Ohio honors in both sports. He was recruited to play basketball at Ohio State University but decided to play football at Big Ten rival Northwestern University.

When his playing days were over, Beutel took his bachelor’s degree in education and returned home to his alma mater where he taught social studies and coached football, boys and girls’ basketball and track.

His basketball Lady Rangers compiled a record of 461-134 with 12 regional appearances and two trips to the state tournament’s final four. Coach Beutel called it a great privilege to coach his two daughters, Britt and Brooke, as members of those state qualifying teams.

After spending a combined 40 years as a student and teacher in the Willoughby – Eastlake school system, Beutel retired in 2005, but not for long. One year later, he was approached and accepted the head girls’ basketball position at Gilmour Academy. Coach Beutel’s twelve years at Gilmour produced a record of 233-68 with 9 district finals, 4 regional appearances and 2 trips to the final four – culminating with a state championship.

Beutel’s second bite of the apple has lifted his career coaching victory total to 694 which ranks him 4th on the all-time list of Ohio girls’ basketball coaches; however, Beutel will reference all the student athletes that moved on to the collegiate level as his most gratifying number.

Beutel and his wife Claudia reside in Chardon Ohio. Claudia has served as his assistant coach for over 550 of those victories. Beutel has always echoed Woody Hayes motto “you win with people” and has enjoyed surrounding himself with long standing alumni and friends.