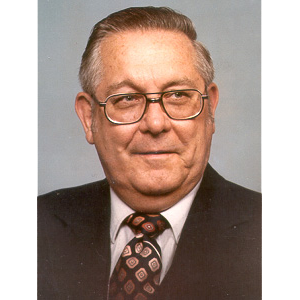 James Robert “Bob” Hart was a native of Columbus, Ohio and was graduated from South High School in 1942. During his years at South he lettered in varsity football, basketball and baseball. Bob matriculated to Ohio Wesleyan and was a member of the basketball and baseball teams. After one year he joined the United States Army during World War II and served three years in the European Theater. He then returned to Ohio Wesleyan and graduated in 1949.

Bob began his coaching career at Manchester High School, followed up with season at Peebles, Junction City and Watkins Memorial before settling as head coach at Columbus East High School.

During his 15 years as head coach, Hart compiled an enviable record of 245 wins and 96 losses. In that short span, his teams had many accomplishments, winning nine league titles, ten sectional and six district championships. In 1963 his team was Regional Champs, defeating Cleveland East Tech 58-44. That year they also defeated Marion Harding for the State title 41-32. In the 1968 Regional Finals, his team defeated Euclid 75-40, and became 1968 State Champs by defeating Hamilton Garfield, 64-60. In 1969 Columbus East won its third Regional Championship, defeating Toledo Libbey 64-63 and it third State Championship, winning over Canton McKinley 71-56. The combined record for the 1963, 1968 and 1969 seasons of Columbus East High School was 74 wins against one loss!

Coach Hart was selected UPI Class AA Coach of the Year in 1963, 1967 and 1969. He coached in the North-South All Star Game in 1969. Bob was the beneficiary of many talented and dedicated players. His teams were enhanced by his keen offensive mind and belief in stifling pressure defense. His up tempo style became a model for many coaches who followed him.

Following his coaching career, Bob served as athletic director at Columbus East and Walnut Ridge High Schools retiring from the Columbus Schools in 1980. Robert Hart passed away on February 20, 2005. He is survived by his wife Millie and daughters Bobbi, Sherri and Lynn and their families.