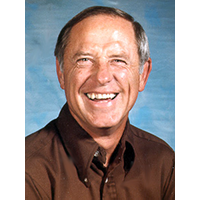 Bob Anderson is a dying breed of coaches that have remained at the same school for his entire teaching and coaching career. He spent 30 successful years (1957-1987) at Anna and wore many hats. He taught health, physical education, driver’s education, sociology and biology. He was athletic director for 30 years and Senior Class Advisor for 25 years.

Coach Anderson’s motto over his years of coaching was: "The heart carries the feet". According to him he was blessed with many kids with great attitude and willingness to work very hard to achieve. Much of this attitude came from parents and a wonderful community in which to live. My wife, Caryll, through her love and support, was the best "assistant coach" a man could ever ask for. The third reason for my success was my special "Mentors" at the Ohio State University - Woody Hayes and Fred Taylor.

His church is the Anna United Methodist where he has been a member for 47 years and served as Council President, Vice President, Trustee member, Pastor-Parish Relations, as well as other positions through the years.

His wife, Caryll, passed away a few years ago. They had three children: Daniel, Julie A. Isely, Amy Anderson and three grandchildren. Bob was married to Rhonda in July 2004 who is an Anna Elementary Art teacher.

Bob was a lifetime member of the OHSBCA and received an Honorary Membership in the OHSBCA.