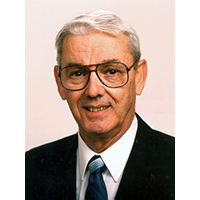 Throughout his career Bob was very active in the coach's association, not only on the local level but also the state and national levels. He organized the District 8 Coaches Association in 1966, serving as President through 1968. He served as District Director of the OHSBCA from 1966-68 and then was elected Assistant Secretary / Treasurer of the state association, from 1970 to the present. He also served on the Basketball Rules Advisory Committee from 1987-1994. For many years he has also been a member of the National Federal Interscholastic Coaches Association.

Coach Arnzen received many honors during his career, including: Coach of the Year in Ohio twice; National Catholic Coach of the Year; Paul Walker Award; Ohio Pro / Am Award for Distinguished Lifetime Achievement in Sports; Mac Morrison Lifetime Service Award from the Northwest Athletic District Board; University of Dayton Sports Achievement Award; and Northern Kentucky Sports Hall of Fame.

His coaching philosophy was that any success he had in coaching was due to having good players, their ability to play as a team and to always play hard.

Bob graduated from the University of Dayton in 1951 with a Bachelor's of Science in Education, and received his Master's in Administration there in 1979. He is a devoted family man with wife Alice, sons Jim and Ted, and daughters Elaine Sheehan, Marie Arnzen and Jeanne Gulick. He has eight grandchildren.