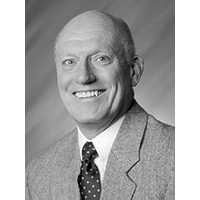 Bob Shoemaker graduated from Xenia Central High School in 1957 and from the Ohio State University in 1962. While at OSU he lettered three years in lacrosse and was captain his senior year. He received his Master of Education degree from Wittenberg University in 1967. During his career he taught physical education, health and mathematics. In 1987 he was awarded the Dow Chemical Excellence in Teaching Award from Licking County and in 1984 the Heath Key Club Educators Award.

Bob's coaching honors included Class AA Coach of the Year Central District (1984 and 1987), District 11 Coach of the Year (1984, 1986 and 1991), Licking County Coach of the Year (1984, 1986 and 1987). In 1991 he was enshrined in the Licking County League Coaches Hall of Fame and in 1995 he received the Sportsmanship Award from the Lancaster Basketball Officials Association. He was the recipient of the Paul Walker Award. Twelve times he coached the LCL All-Stars and three times the District 11 All-Stars. In 1993 he coached in the Ohio North-South Classic. Coach Shoemaker's teams were undefeated in the regular season at Big Walnut in 1971-72 and at Heath in 1982-83. He was a head coach for 34 years, 25 of which, were at Heath and Big Walnut.

Coach "Shoe's" philosophy is simple. Play hard, play smart and play together as a team and have the discipline to do what you have to do when you need to do it.

Bob was a vital member of the OHSBCA Board of Directors from 1986 to the present. He served as District 11 President for nine years. He was representative to the OHSAA on the Sportsmanship, Ethics and Integrity Committee from 1991 to the present. Coach Shoemaker was active in the local and state teacher's associations. He aided with programs in the Newark YMCA and his church activities. He and his wife Jane have two children, a daughter, Roberta Jo and son, Chuck and a granddaughter Shilah.