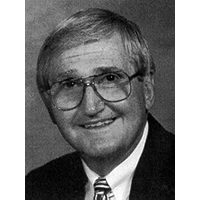 Coach Felhaber was a graduate of Olney High School and the University of Toledo where he was captain of the Men's Varsity Basketball team his senior year. At Olney High School he lettered three years and was All-State Honorable Mention. He received his master's degree in education from the University of Toledo and was an Army tank commander during the Korean War. From 1951-53 while in the army, he played basketball on the Fort Campbell Post team. Bud was a teacher for 21 years in the Oregon Clay School System where he served as the varsity basketball coach for Clay High School and had an undefeated season in 1974-75. While at Clay High School, he served as cross country coach for four years. He also served as varsity basketball coach for both Bettsville and Port Clinton High Schools. He coached baseball at Bettsville and had three league championships, two District championships and one Regional final. While at Port Clinton, he started baseball in 1965 and also coached golf one year and served as Athletic Director during the 1966-67 school year. The biggest reasons for Bud's success as a coach and teacher were his tireless work ethic, his insistence on learning and mastering the fundamentals of the game of basketball and the importance of personal character both on and off the court. During his 31 years of coaching his teams accumulated 315 wins. His teams won three league championships, four sectional championships and one district final. He was elected District Coach of the Year in 1975, District 7 All-Star Coach in 1978, Ohio-Michigan All-Star Coach in 1976 and 1988, and was elected District Retired Coach of the Year in 1992. Bud served as president of District 7 Basketball Coaches Association and also served as a board member of the OHSBCA for 12 years. He was a founder of the District 7 All-Star Games, served as director of the Ohio-Michigan All-Star Games, assistant director of the Ohio-West Virginia All-Star Games, and was recently inducted into the initial class of District 7 Basketball Coaches Hall of Fame. After leaving Oregon Clay, with coaching still in his system, he went to St. John's Jesuit High School where he was assistant varsity and JV coach from 1988-2002. His JV teams were very successful winning the Toledo City Championship in 1990. The varsity teams were also successful going to the State Final twice and being #1 in the State in 2002. In addition, he coached the Ohio-Michigan All-Stars vs Russian Junior National Team in 1976-78. He coached the Ohio-Michigan Senior All-Stars vs the Yugoslavian Junior National Team in 1979-83. His record was 5-0. Bud is survived by Edie, his wife of 49 years, son and daughter-in-law Randy and Emily Felhaber, grandson Nicholaus and step-granddaughter Julie and Jacqueline Camilli; daughter and son-in-law Sue and Dan Hipsher and grandsons Andy and Bryan.