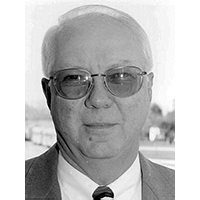 A 1959 graduate of Celina High School and Marietta College in 1966, he is married to Melody and has two daughters, Amy Maier and Tracy L. Richard. He has two granddaughters, Kayla and Kelsey Richard. He has been active in the Coldwater community, elected as mayor in 1996 for a four-year term. He was president of the Coldwater Community Picnic and chairman of the Combined Charity Drive. He is a member of the Knights of Columbus, Holy Trinity Church, Kiwanis Club and Elks Lodge #2170 in Mercer County.

His teams were successful because they dedicated themselves to hard work and gave their best. His philosophy was:  "You get out of a season what you put into it. If you don't work hard, you won't get much in return."  Their concern was not for winning or losing, but more of how they played the game.