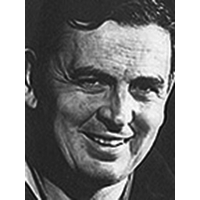 Charles McAfee was one of Ohio’s best known and most successful high school coaches. He spent 36 years in coaching Boys Basketball. His teams won 571 games and lost 196, a .744 winning percentage. In a 36-year career (1941-77), he spent 13 years as head coach at Ames-Bern High School where his teams had a 255-68 record and 22 years at Athens High School, which had a 316-128 record. Two of McAfee’s teams – one at each school – were unbeaten in their regular seasons. His Athens' basketball teams won 16 league championships over the 22 years.

During one stretch, there were eight straight years when Athens won or tied for the Southeastern Ohio Athletic League championship. His teams won 16 league titles. In December, 1987, the gymnasium at Athens High School was named after him. McAfee played on two championship teams at Sac City High School in Iowa.