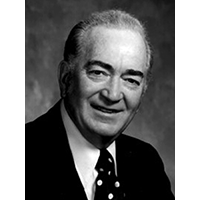 Charles”Red” Ash was one of Stark County's most colorful coaches during his 37-year tenure at Canton South High School. He was also one of the most successful as evidenced by his 634-200 won-lost record. When he retired he was the winningest coach in Ohio.

Born in the northwestern Ohio community of Ada, he went across the state to coach at Canton South at the age of 26 and became an institution. Though he also took turns coaching baseball and football, Ash was best known as the Wildcats' basketball coach. His 1948 team reached the final four after winning two regional games by a combined 99-45 points. Ash's 1955-56 team, led by future NBA player Howard Jolliff, went 23-1 after the 1954-55 squad won 16 of its last 18 games. Larry Gerzina, a member of the 1954-55 team, once told the Canton Repository: “Everybody was afraid of Red. If you got in trouble, you'd rather face the Gestapo than Red. He controlled everything. You went to school and you shut your mouth. But Red also was a lot of fun.”

While at Canton South, Red is remembered for his fiery, highly emotionally-charged style of coaching. Currently, Red is serving as a State Representative in the State Legislature and serves on the following committees: Education, Health and Retirement, Public Improvements Inspection, Economic Affairs and Federal Relations and Highway and Public Safety. Red resides in Canton, Ohio with his wife, Esther, and has four sons, Charles Jr., David Christian, Paul Norman and Jonathan, all college graduates.