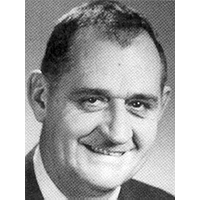 Coach Reichenbach graduated from Bluffton High School in 1937 and Bluffton College in 1941. In 1951 he received his Master's degree from Bowling Green State University. From 1942-46, he served in the US Navy as Chief Specialist in Athletics with a tour of duty in Guam, where he coached the base basketball team. Coach Reichenbach spent one year at Montgomery Local (16-8) and the next five years at Grand Rapids, Ohio (106-21). They won the State Class B Title in 1951 with only 51 boys in the school, beating many larger Class A Schools from the Toledo area.

Starting in 1953, he spent 13 years at the helm in Elyria. Pioneer basketball teams won 221 games and lost only 78 for a sparkling 73 percent. They won nine sectional and district championships for Elyria, going on to win regional crowns twice, in 1961 and 1964. For his 19 yeas in coaching, Reichenbach complied a tremendous 343-107 record,  a winning percentage of .762. Some of his best won-lost records were 29-2 at Grand Rapids in 1951, 20-2 in 1958, and 23-1 in 1959. In 1966 the Pioneers were 20-4, with one of the victories over Toledo Libbey, the state's second place team in the state finals in Columbus. Under his coaching, Elyria won five Buckeye League championships, including 1966 when the team was ranked seventh in the state.

Reichenbach was master coach of strategy, and had an excellent statewide reputation. Elyria teams played a controlled, pattern style of basketball with a strong emphasis on defense. It was never more evident than in 1966 when the Pioneers held opponents under 50 points a game.

One of his main philosophies of coaching is "I believe one of the most important things for a coach to teach is that the players should bring credit to themselves and their school, both on and off the court." He stressed courtesy, proper dress and manners, and felt that this brought squad morale to its highest peak, paving the way for victories on the floor and for good citizenship later in life. He had every practice planned and timed, carefully to teach with emphasis an aggressive and intelligent play, mixed with team effort, hard work and doing your best.

Dale and Elsie, his wife of 53 years, have three sons, Randy, Gary and Tim, and six granchildren.