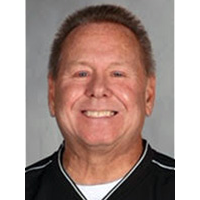 Dave grew up the son of a Superintendent and Elementary School Teacher. He graduated from Toronto High School in 1973 where he lettered in basketball, football and golf and is a member of the Toronto High School Hall of Fame. He received his undergrad and Master’s degree from The Ohio State University.

After beginning his coaching career on the Boys side, he accepted the Pickerington girls head coaching job in 1983. Butcher would quickly turn around a struggling program and win his first State Championship at age 30 in 1985 starting an unprecedented 15 year run which would put Ohio girls basketball on the map.

Largely due to his team’s relentless effort on the defensive end, Butcher’s teams were ranked for 10 straight years in USA Today’s Super 25 and were ranked number one in Ohio by the Associated Press for nine consecutive years. Pickerington also had a 74 game winning streak and won 181 straight league games during his career. Five of his players were named Player of the Year in Ohio and more than 70 of his student athletes have played Division 1 college basketball.

Dave was inducted into the Ohio Basketball Hall of Fame in 2008 and the Greater Columbus Basketball Legends Hall of Fame in 2015. Other career highlights include defeating Ohio and WNBA Legend Katie Smith’s Logan Lady Chieftains in front of a still record crowd (12,385) St. John’s Arena in 1992 and knocking off Christ the King High School, New York which featured WNBA legend Chamique Holdsclaw and Oregon City High School, then USA #1, in back to back nights.

Collectively, Coach Butcher has been the head varsity Girls basketball coach in Pickerington for 35 years, 20 years as head coach at Pickerington Central and 15 years as head coach at Pickerington North. He comes into the 2017-18 season with a record of 737-133, all in the “big” school division, which is almost a 84% winning percentage. He has won 24 district titles including 23 in a row. His teams have won 23 Ohio Capital Conference Championships, 13 regional championships, 6 state titles (’85, ’90, ’92, ’93, ’98, and ’99) and finished #1 in the country by USA Today in 1999. Amazingly, Butcher took teams to the Ohio Girls Basketball State Tournament in four different decades.

Dave has been married for 38 years to Linda and they are the proud parents of two sons and a daughter. Brian is a graduate of Capital Law School and is employed as an attorney in Columbus, Jeff is a faculty member at the College of Coastal Georgia, and Stacey, a Capital nursing graduate, is a labor and delivery nurse in Traverse City, Michigan.