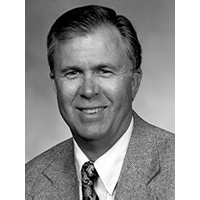 If variety is the spice of life, than Coach Bell has an extra serving. He is the first girls basketball coach to be inducted into the OHSBCA Hall of Fame, but his experiences as a coach include boys basketball, boys and girls track, cross country, golf, football, and even some tennis. At Rosecrans, he was the boys varsity basketball assistant at the same time he was the girls head coach. That's variety. Overall he has coached 26 All-Ohio players in basketball, track, and cross country with six state championships and three state runner-up finishes in three different sports! But his main love has been coaching girls basketball.

At Zanesville Rosecrans, his girls teams won 77.4% of their games in a 14 year span, winning the Class A State Championship in 1982 and 1983 in undefeated seasons. In 1984, they were state runner-ups, plus his teams won four league, nine sectional, and four regional titles. They hold a record of 55 consecutive wins in Class A and 21 consecutive tournament wins. He was District 12 Coach of the Year in 1983, 1985, 1988, 1990, 1992, and 1993. In 1983, he was the UPI and AP State Coach of the Year and in 1992, the OHSBCA Girls Division I Coach of the Year. In 1988, he coached the girls team in the Ohio-Michigan All-Star Games, and also coached several District 12 All-Star teams and the Muskingum County All-Stars. He has been a guest speaker at the Ohio State Clinic and many other clinics and camps in Ohio.

He was the Eastern District Track Coach of the Year in girls track in 1981, 1985, and again in 1987, having three undefeated regular seasons and establishing many track records. There were state champions in Class A in 1981, 1983, and 1984, and runner-ups in 1982. In 1975, he coached an undefeated boys track team with an overall record of 16-3 over two years. In girls cross country, the team was the district runner-up four straight seasons, with two undefeated seasons. His golf team earned the district championship in 1972, and had a record of 164-5 over three seasons.

In education for 25 years, he was at Rosecrans from 1971-1985 and at Zanesville 1985-1992. He served as Athletic Director at Zanesville City Schools beginning in 1988. He graduated from Zanesville High School in 1965 and Ohio University in 1971. He and his wife, Barb, have three sons: Shawn, Scott, and Brian. He has been actively involved in his community, including the Y-City Youth Basketball Board of Directors, the Zanesville Jayees, Elk's Club, St. Nicholas Catholic Church and creator of the Tournaments, the OHSAA Track and Field Advisory committee, the EOIAAA District Board, the OIAAA State Board, the NIAAA National Awards Committee, and the Ad Hoc Committee for Public Relations.

His coaching philosophy was that teaching the game of basketball should always be the main focus because of its direct relationship to the game of life. Teach and show that good academic habits, hard work, dedication, good character and team play are the keys for success, both on and off the court.