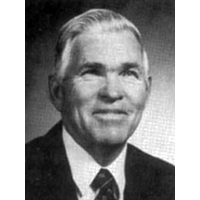 Berning always believed that athletics were an educational pursuit by which student athletes learned very important lessons in life. Though he liked to win, Dick cared far more about his athletes' well-being. He was foremost a teacher, counselor and friend.

Dick Berning's name is synonymous with high school basketball in Cincinnati. He served for 40 years as head coach of basketball at St. Xavier High School, where his career began in 1955. In that four decade span, he had the amazing record of 568 wins against 300 losses, average of fourteen wins per season. He led his teams to ten Greater Cincinnati League championships, six district championships, one regional and one state runner-up finish. Among his most notable seasons with the Bomber teams were 1957-58, 1985-86 and 1990-91, when each team was named City Champ in the Cincinnati Enquirer high school poll, and 1964-65 when his team made it the State Tournament finals.

A uniquely memorable tribute to Coach Berning's career came in January 1988 when Rollins College played the University of Dayton. Tom Klusman, coach of Rollins, put five special members of his team into the game at one time for one of the fans at the game - Dick Berning. The players were five St. Xavier graduates who had been coached by him in their high school playing careers. To the best of anyone's knowledge, it was the first time that five graduates from the same high school had played together in a collegiate basketball game!

A graduate of Roger Bacon High School and Xavier University, he played both basketball and baseball. Berning is an honored member of the St. Xavier, Roger Bacon and Hamilton County Sports Halls of Fame. He was selected to coach the South squad in the Ohio High School All-Star Game in 1965 and again in 1984. In 1992, Dick received a Lifetime Achievement Award from the Ohio Pro/Am. He was considered by his peers to be the "guru" of high school basketball throughout his career in Southwest Ohio.

His coaching philosophy was "Players can learn tremendous lessons they cannot learn anywhere else: teamwork, unselfishness,  commitment and camaraderie. It has to hurt to lose, but you must be a gracious loser and a good sport."

Dick and his wife of 39 years, Anne Mae, parented four children: Lori, a teacher; Jenny, a senior at Xavier University; Tom, employed at Besse Pharmaceutical; and Rick, an accountant at Mercy Health System. Dick's family has been a part of St. Clare Parish for more than 32 years.

Coach Berning, who passed away in  late 1995, left Ohio high school basketball a legacy of standards for excellence that will be hard matched.