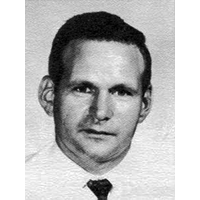 Many times records speak for themselves, but such is not the case with Coach Potts. Although he spent 40 years in coaching with an outstanding record of 589 wins and 286 losses, he earned a measure of respect far beyond the statistics. Through the 1992-93 season, Dick ranks fourth as the winningest coach in the history of Ohio basketball with his 589 wins.

In 1958, he became the coach at Skyvue, where he was again a one-man coaching staff. While there his varsity basketball teams were 52-34, and he enjoyed success as the track coach as well. In 1962 he took over as coach at River High School where he spent 29 years, with a record of 399-218.

During the course of his career, he had 31 winning seasons with 18 sectional, 3 district (1957, 1988 and 1989), and one regional championship in 1957. He personally garnered the prestigious Paul Walker Award, the District Coach of the Year six times, Ohio Valley Athletic Conference All-Star Game Commissioner for many years, and NIS coach. He retains the record as the winningest coach in the East District.

While at River High School, Potts also served as head baseball coach and assistant football coach from 1962 to 1968. Always a friendly guy, Potts never met a stranger and is a first class storyteller. As a coach, he was well-liked by his players, significantly tailoring his team's style of play to the type of material he had. He drove the school bus, and was the school principal. Each night of the week while at Skyvue, Dick went to a different grade to coach. He literally did it all.

Dick belongs to the Stafford Lodge of the Masons. He and his wife Ruth, who passed away in February of 1993, had one daughter, Linda.