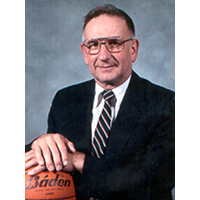 Of all the coaches inducted into the OHSBCA Hall of Fame not many have achieved the stature and the longevity of Doc Daugherty. His contributions to the game are endless and he continues to promote the ideals and integrity of the game in retirement. His awards and honors are too numerous to mention in this short synopsis. Listed are some of the highlights.

Coach Daugherty has been a member of the OHSBCA for 45 years serving as a representative, going through the officer’s chairs, and serving as president from 1984-86. He was named Division I Coach of the Year in 1990. He served as a coach in the following All-Star Games: Ohio-Michigan, Ohio-Kentucky, Ohio-West Virginia, and Ohio North-South along with many other All-Star games in the Cleveland area.

Doc initiated and co-directed the Ohio-Michigan All-Star game for boys and girls (1986-1995) and also the Ohio-West Virginia Games (1996-Present). He initiated and maintained (with the help of June) the Ohio Gold and Silver Awards statewide for scholar-athletes. 1,432 players received this award in 2001.

At Euclid, Coach Daugherty promoted a popular saying, "It’s a beautiful day in Euclid! He wanted his students and players to enjoy and appreciated their lives, but at game time he expected 100% effort and hard work. Doc Daugherty served Euclid High School for 44 years as head basketball coach. He also serves as assistant football coach for 8 years. In 1949 Doc graduated from Glenford High School in a class of 16 students and graduated from Ohio University. In 1954, Doc served in the US Army in Korea as a 1st Lt. in the Medical Corps. After his military service Doc received a Master’s Degree from John Carroll University. He served the American Red Cross as a volunteer teaching CPR for 42 years.