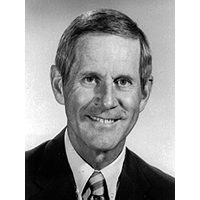 DON DONOHER OF UNIVERSITY OF DAYTON

The OHSBCA welcomes Don Donoher into the Hall of Fame for his contributions in Ohio basketball, for the integrity of his basketball program, his success as a coach, and his willingness to share his time and knowledge with high school coaches. His record of longevity and loyalty to the University of Dayton speaks for his character and as a model for other coaches. The affection former players and associates hold for him reflects his ability as coach and teacher.

Donoher played high school basketball at Toledo Central Catholic from 1947-1950. He graduated from UD in 1954, having played three years with the Flyers for Coach Tom Blackburn. He appeared in 72 varsity games and scored 578 points, with 388 coming in his senior year. As a player at UD, he was on two NIT teams, named captain his senior year, played on the 1952-1953 team that upset number 1 ranked Seton Hall. He scored the first basket of the game, scored on a three-point play that broke the 56-56 tie, and scored the final basket that insured what many consider to be the greatest win in field house history.

After a two year hitch in the Army, he returned to Dayton and a stint as a salesman of office equipment. When he spoke to Blackburn about trying his hand as a basketball official, Blackburn discouraged him, instead offering the opportunity to scout games. For six years, Donoher was a full-time salesman and a part-time basketball scout. For eighteen months, he served as Head Coach Tom Frerick's assistant at Dayton Chaminade High School. Then Blackburn selected him as the University of Dayton first full-time assistant basketball coach in February 1963. Thirteen months later Blackburn died of cancer, with Donoher coaching the final three games of the 1963-1964 season. Eleven days after Blackburn's death, Donoher was named head coach.

By February 1984, Donoher passed Blackburn's record, becoming Dayton's winningest coach with 353 wins as Dayton won its 1,000th basketball game. He took his first three teams to the NCAA tournament, making him just one of ten coaches to do so. He is the only coach to have taken his alma mater to the championship game after appearing in the tournament as a player. He began his college coaching career with seven consecutive post-season appearances, including a second-place finish in the 1967 NCAA tournament and the 1968 NIT championship. Only seven other coaches have done that. He is in the Toledo Central Catholic Athletic Hall of Fame, the Toledo Area High School Hall of Fame, and the UD Hall of Fame. The addition to the University of Dayton Arena is in his name, featuring state-of-the-art locker rooms, training facilities and weight rooms.