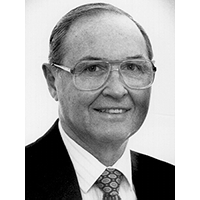 Don graduated from Cadiz High School in 1947, from Wittenberg University in 1954 and OSU in 1958 with a Masters Degree. He coached for 36 years, seven at Roosevelt Junior High before coming to coach at Springfield North where he served as head coach for 29 years.

Don served as District 9 Director on the OHSBCA Board of Directors for 15 years; coached baseball for 22 years with 252 victories and was elected to the Miami Valley Baseball Coaches Hall of Fame; coached several players in the minors and one reached the Major Leagues. He had the privilege of developing a player who became Captain of the OSU basketball team and another who became Captain of the OSU football team.

Don served in the Air Force for 3 years and played in the Rice Bowl in Tokyo in January 1950. Don and his wife Char have a son, Dow W. who is married to Kim and a daughter, Jill both of whom are teachers. They have 4 grandchildren.