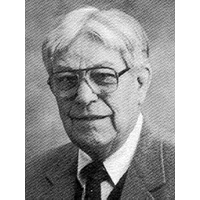 An outstanding coach at the high school and the college level, Frank Shannon is the third Honorary Member to be inducted into the OHSBCA Hall of Fame. His colorful personality and dedication to the game are hallmarks.

Orphaned early, he grew up in the Masonic Home in Springfield. Although he wanted to attend Ohio Wesleyan University, his Springfield High School coach told him he "wasn't ready for the next level," so Shannon used a Masonic scholarship at Wittenberg University. There he excelled, playing on a team that had a 15-game winning streak and setting Wittenberg's single game scoring mark for that era - 24 points. He was leading scorer two years and won All-Conference Honors.

Shannon coached one year before being drafted in 1941. He entered as an Army private, and ended up as a Major in General Douglas MacArthur's G-2 staff in the Southwest Pacific theater. During stateside duty, he was player-coach of an Army team, going 44-3 and losing in AAU semifinals. He became the youngest player-coach in the NBL, for the Youngstown Bears, but when his contract was sold, Shannon decided that his family needed more security than pro basketball could offer.

He taught and coached four years at Olive Branch High School and remained another four when that school became Tecumseh High School. He had six consecutive 20+ season. His teams were known for their up-tempo basketball. His Tecumseh teams won three straight district championships, with players Wayne Embry and David Zeller going on to play professional ball.

In 1955 Coach Shannon co-coached the North team in the National High School All-Star game. He then coached three years at Urbana High School before becoming Ohio' Wesleyan's fifteenth basketball coach in 1958. His 1961-62 team compiled a 21-3 record, second best in OWU's 86 years of intercollegiate basketball. When he retired in 1979, his 214 wins ranked first in OWU and sixth in OAC coaching records.

Shannon was 1957-58 president of OHSBCA, and organized the first North-South Ohio All-Star Game in Troy, with Adolph Rupp as clinic speaker. He also served as President of the OAC Basketball Coaches Association. He was inducted into the OWU Hall of Fame in 1979 and the Wittenberg University Hall of Honor in 1988, and named Columbus Dispatch Ohio Coach of the Year in 1962.

Frank and wife Mary had four sons: George, Donald, Thomas, and Frank Jr. who died at a football practice while a sophomore at Delaware High School.