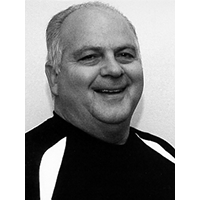 One of the most energetic coaches in Ohio, he led his teams to 440 victories in 31 years as a head coach, the last 25 years as the head coach at Cambridge High School. Gene started his coaching career at Shenandoah (1974-75) and from 1975-80 he was the coach at Tusky Valley.

Gene graduated from Indian Valley North High School in 1970 where he earned 11 varsity letters in baseball, track and basketball. He graduated from Muskingum College in 1974 where he was a 4-year letterman in basketball and was chosen for the UPI "Small American" team. Gene was also chosen for the national Association of Basketball Coaches District 4 All-American team. He was an active member of the OHSBCA for 31 years. He served as District 12 President and was the East-West District 12 All-Star Game Director. He is on the Board of Trustees for the OHSAA Foundation and on the Board of Trustees for the Ohio Hoop Zone. He was the recipient of the Samuel A Mumley / OVAC All-Star Basketball Classic Earl Haberfield Coaches Award.

Gene's teams won: 18 sectional titles, 8 district titles, 5 regional titles and were the State Runner-up in 1994-95. Near the end of his coaching career he was immortalized with a "bobble head" statue in his honor with the proceeds from the sale going to the Scott Bennett Memorial Scholarship Fund for students a Cambridge High School.

Gene's philosophy of life and basketball is: I'm just a coal miner's son from Midvale, but I have learned how to hold a team together, how to lift some men up, how to calm down others, until they have one heart beat together. There are just three things to every say: (1) If anything goes bad, I did it. (2) If anything goes semi-good, then we did it. (3) If anything goes real good, then you did it. That's all it takes to get people to win basketball games for you.