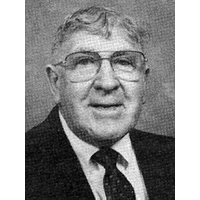 He served as Vice President of the Ohio High School Basketball Coaches Association for four years and was District Director for six years.

George played at Western Kentucky on a scholarship under the legendary Ed Diddle. His college career was interrupted by World War II when George spent 44 months in the South Pacific. Coach Heller returned to Portsmouth in 1947 and served as reserve coach for Bill Rohr for four years to begin his coaching career. He also served as an assistant football coach and head baseball coach. In 1951, Coach Heller took over the boys program. He was Ohio Coach of the Year in 1961 and named to coach the South team in the annual North-South All-Star game that same year.

In addition to coaching basketball, he served as an official in football, volleyball and basketball. His 1951 baseball team was the first team from Portsmouth to reach the state semifinals. George was Assistant Principal at Portsmouth High School for eight years. He is a full fledged Kentucky Colonel and active in the American Legion, Elks, Masonic Lodge and Christ Community Church.