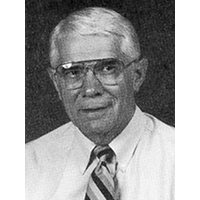 His philosophy of coaching was to build a defense based on solid man-to-man principles and the adjust according to their opponent's strengths and weaknesses. They ran a sideline break predicated on a made or missed shot which flowed into their set offense and emphasized good shot selection.

When looking at Coach Glenn Wyville's career as a basketball coach, the numbers do not jump out at you but his commitment to the game, to his players and his approach to teaching the game and getting the best out of his material certainly does. Esteemed by his peers for his masterful game preparation, Glenn guided his Tigers teams to 352 victories during his reign as Head Basketball Coach at Chagrin Falls from 1960-88. They won three district titles, eight sectional and seven conference crowns. His 1974-75, 1979-80 and 1986-87 teams advanced to the Regionals. He was selected Conference Coach of the Year seven times and in 1987 received the Greater Cleveland Coach of the Year.

As head baseball coach, his teams won two conference championships. He taught Science and Health and Physical Education. From 1983-94, he served as department chair in Health and Physical Education, as well as Athletic Director at Chagrin Falls. In 1988 he received the Dennis Lustig Golden Deeds Award and in 1993 was inducted into the Chagrin Falls Alumni Association Athletic Hall of Fame.

Glenn graduated from Bedford High School, Otterbein College and earned his Master's Degree from Kent State in 1961, followed by 28 years as Head Basketball Coach at Chagrin Falls. Today Glenn and his wife, Marilyn, have three grown children, Cindy, Dale, Darren, and two grandchildren, Matthew and Kyle. He and Marilyn have been married 41 years.

Coach Wyville involved himself at all levels of youth basketball programs as evidence of his commitment to the youngsters and the program. He was Director of Community Recreation from 1964-88 and received the Chagrin Valley Jaycees Distinguished Community Service Award in 1986.