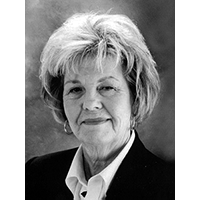 Gretchen Prichard graduated from Spencerville High School in 1954 and from Muskingum College in 1958. She received her Master Degree from the University of Dayton in 1982. Teaching Health, English and Physical Education, she served as Bath High School for 37 years. She started the softball program there (11-0 in 1974), the volleyball program (11-4 in 1975), and the girls' basketball program (11-1 in 1971). Before starting these interscholastic programs, she was the GAA advisor twelve years.

Coach Prichard did all of her coaching at the same high school, Lima Bath, which is rare for modern day coaches. Her varsity teams amassed 460 victories balanced with 116 losses, with a 79.9% winning average. During her tenure, she had only one losing season and that team went on to win the state championship three years later! Her teams achieved the following championships and honors:  Ten Western Buckeye League championship, eight runner-ups, seventeen sectional championships, two regional championships, 1987 AA State Champions, 1996 Division II state runner-ups, a 62-game winning streak from 1971-1976, six undefeated regular seasons, fifteen holiday championships, and in 1996, the mythical state poll champs.

Prichard has had nine players awarded Division I scholarships, six players became prominent coaches, and 40 players went on to excel in college ball. Coach Prichard's main emphasis in coaching was to create teams that shoot and pass well, rebound and run the fast break, dominate on defense, and play unselfishly as a team. She believed that intense practice coupled with mental preparation enabled the players to enjoy the competition and perform at their best.

She and her husband Dave have been married forty years. Their three children, Clarke, Patrick, and Amy were "All Ohioans" at Bath High School. All three are or have been coaches, and coached at her camp for twenty years. She has four grandchildren:  Paige, Dakota, Shelby, and Bailey.