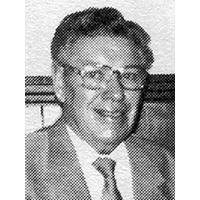 Herb graduated from Raymond High School in 1935, from The Ohio State University in 1950 with a B.S. and again in 1962 with his Masters degree. In 23 years of high school coaching his teams won 345 and lost 119 for a 74.4 winning percentage. He coached two years at Stoutsville, three years at Washington Court House, and 18 years at Grove City.

His teams won 13 league titles, three at Washington CH and ten at Grove City. They won five sectional tournament and one district championship in 1964. He was on the Board of Directors of the OHSBCA for five years. Herb's teams had four season with 20 or more victories and 13 season of winning 15 or more.

Herb's career included stints as JV coach at OSU under Fred Taylor and JV coach under Marty Karow in baseball (4 years). He was baseball coach at Stoutsville for two years and Washington CH for three years with a 76% winning record. At Grove City he served as golf coach for 12 years and also did some basketball officiating for ten years. Herb and his wife Edna live in Columbus, Ohio.