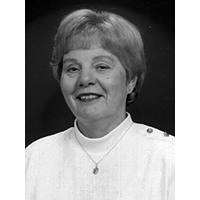 Coach Poeppelman was very active in the OHSBCA, serving several years as an officer in District 9. She has the distinction of being the first female Girls Coach to be inducted into the OHSBCA Hall of Fame.

Jane's teams had eight twenty-wins seasons, with a winning rate of 74.8% over 22 seasons. In 1991, she was chosen as a coach of the North-South All-Star Game. Her record included eleven league championships in the always tough Shelby County League, seven years as District Champions, and two years runner-ups in the regionals, 1979 and 1991.

Her coaching philosophy was "Through the course of coaching, motivate players to learn the game, play with teamwork, have fun, and experience success."

She has been active with her community and professional organizations. She is a member of St. Michael's Catholic Church; G.Y.M.; American Legion Auxiliary; Delta Kappa Gamma Education Sorority; Ohio Association of Health, Physical Education, Recreation, and Dance; President of the Fort Loramie Education Association, and longtime member of the OHSBCA.