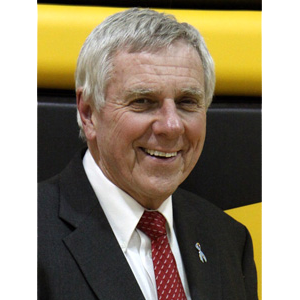 Jerry Sigler (Eastwood High School Class of 1963) is a ’70 (BS) and ‘74(M Ed) graduate of Bowling Green State University. Sigler taught elementary physical education in Sylvania Schools for thirty-one years (1970-2001). He began his coaching career at Sylvania High School in 1975 as the JV Girls’ Basketball Coach. The following year, after Sylvania split into two high schools, he became the Varsity Girls Basketball Coach at Northview, a position he held for thirty-seven years. When Jerry retired from coaching, his overall record was 675 wins and 177 losses. He finished his career as the third winningest coach in the history of Ohio Girls’ Basketball.

Sigler’s LadyKats won 18 League Titles (9 G.L.L. and 9 N.L.L.), 28 Sectional Championships, seven District Championships and three Regional Championships with trips to State Final Four in ’79, ’04 and ’05. Three of his teams had undefeated regular seasons (’78-’79, ’97-’98, ’03-’04). Jerry is most proud of the fact that every one of his thirty-eight teams had a winning season! His teams averaged 18 wins per season over the 37 years as Varsity Coach.

Besides coaching basketball, Sigler spent 14 years as the Head Softball Coach at Northview with an overall record of 226 – 100. His teams won six league titles, eight Sectional Championships, three District Championships and one Regional Championship. Five times (four G.L.L. and one N.L.L.) he was named League Coach of the Year.

Sigler was a 2014 Inductee into the Sylvania Schools Athletic Foundation Hall of Fame. The basketball floor at Sylvania Northview High School has been named “Jerry Sigler Court”.

Jerry is extremely honored to be included in the OHSBCA’s Hall of Fame with the best Basketball Coaches in the history of the game in Ohio. He is also tremendously gratified with the life-long friendships and memories he has established.