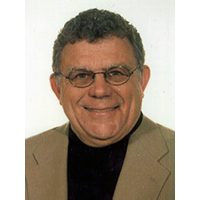 In 1997-98 the Ohio High School Basketball Association presented the prestigious Paul Walker Award to Jim Lawhead, Head Basketball Coach at Lorain Catholic High School. The award was presented to Coach Lawhead at the halftime of the Division IV Basketball Championship game by Dave Krauss, the President of the OHSBCA.

Coach Lawhead is a native of Lorain, Ohio and graduate of the "old" St. Mary High School and Ohio Northern University. He received his Master’s Degree in sport management from the United Sports Academy in Dalphne, Alabama in 1990. Coach Lawhead served as the Athletic Director of St. Mary High School and Lorain Catholic for thirty years and is currently the Assistant Principal. He is in his 40th year of education.

Coach Lawhead retired after 1999-2000 season after 37 years as head coach. He began his head coaching career at his alma mater, Lorain St. Mary, in 1962. In 5 seasons at St. Mary his record was 79-25. Jim also spent two years as head coach at Lorain Brookside in the 60’s. Coach Lawhead became the first head coach in Lorain Catholic history where it opened for the 1969-70 school year. His record at Lorain Catholic was 428-235 and his overall career mark was 516-289.

His 1975-76 team went 25-1; winning 25 straight games before losing 82-81 in the Class AA Championship game at St. John Arena. The "76" team still holds several state tournament records including the most points (108) in a game in any class. Coach Lawhead’s 1985 team went 23-4 and advanced to the state semifinals. His teams also won 11 league titles, 19 sectional championships, 9 districts crowns and 9 "Sweet Sixteen" appearances.

Coach Lawhead was named Boys Division III Coach of the Year by the OHSBCA for the 1992-93 season, has received the Bob Arnzen Longevity Award and was inducted into the Lorain Sports Hall of Fame in 1985.  Jim resides in Lorain with his wife of 41 years, the former Barbara Ann Rodisel. They have 7 grown children: Jim, Michael, Kathy, Lisa, twins Maureen and Matthew and Jason. They have four granddaughters, Riley, Jessica, Madison and Ellie. Mrs. Lawhead has served as the 5th grade teacher at St. Anthony grade for a number of years.

Coach Lawhead thanks the OHSBCA for this high honor and pays tribute to Coach Walker and those other pioneers of Ohio basketball that have made the game in this state what it is today. He also thinks his school community, co-coaches and colleagues, his family and all the players who that made up his many teams. His philosophy for Spartan basketball was simple: play together, play hard and have fun. He made it a learning experience in discipline and a journey in education and teamwork. Jim is a charter member of the Lorain Sports Hall of Fame Committee of the Lorain Chamber of Commerce serving as President in 1975 and Toastmaster form 1975-1984.