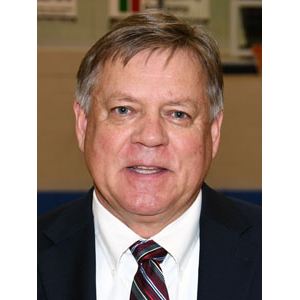 Joe Balogh grew up on a small farm in Edgerton, Ohio as the son of Paul and Merilyn Balogh with three brothers (Dave, Don, and John) and four sisters (Paula, Cindy, Kathe, and Karen).  His parents set an example of the importance of hard work as his father worked in a local factory as well as managing the farm, while his mother stayed at home to raise the family’s eight children.  Joe was a special mention All-Ohio basketball player for the Edgerton Bulldogs along with being a letterman in cross country and baseball.  Basketball had a great impact on Joe’s life in high school and his high school coach, Ron Stevens, was a major reason why Joe decided to pursue a degree in elementary education and a career as a teacher and coach.

After his high school graduation in 1976 Joe attended Ohio Northern University where he earned a B.A. in Education in 1980 and was a part of the Polar Bear basketball program.  During his first two years he played on the JV team and then after being cut in his third year he was offered the opportunity to be a student assistant.  This opportunity provided another spark to pursuing a coaching career and he was provided the opportunity to coach with two legendary Ohio Northern coaches, Gale Daugherty and Joe Campoli.  Both of these coaches had a major influence on helping develop a coaching philosophy of sound fundamental defense and efficient offense.

Upon graduation from ONU he began his first teaching and coaching job at Fort Loramie Schools in 1980 where he taught junior high reading and was the JV coach for George Hamlin, who coached the Redskins to a state championship in 1978.  Fort Loramie has a great tradition of basketball and the Shelby County League is one of the most competitive small school leagues in the state.  The passion for basketball at Fort Loramie inspired Joe to pursue his desire to become a varsity basketball coach.  In 1984 a move was made to be the varsity assistant at Ontario High School and the following year an opportunity was provided to become the varsity basketball coach for the Ontario Warriors, a position he has held for the past 34 years.