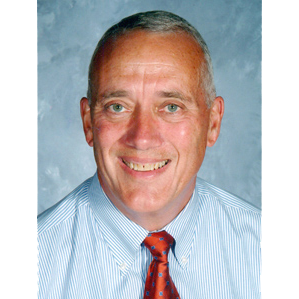 Coach Joe Lynch grew up in northwest Ohio before moving and attending high school at Maple Heights High School. In high school he played baseball and basketball where he was a three year starter and letterman, earning all-conference honors during his high school athletic career. Upon graduation in 1961, he attended Baldwin-Wallace University where he played for four years earning all-conference recognition his junior and senior years. Coach Lynch attend the Ohio State University for one year of graduate work before beginning his teaching and coaching career at Medina Highland High School in 1966.

While at Highland for two years, he was an assistant coach for both varsity football and basketball. In 1968, Coach Lynch was hired as only the second basketball coach at St. Peter Chanel High School. Chanel played a regular season schedule as a member of the North Coast League that included St. Joe’s, St. Ed’s, Cathedral Latin, Padua, Holy Name, Elyria Catholic and Lorain Catholic while also playing an independent schedule that included many teams from the Cleveland East and West Senates. Under Coach Lynch and his up-tempo style, the Firebirds would compile a 3230167 record that included thirteen conference championships, numerous district and regional appearances and a Final Four trip in 1991.

During his twenty-three years at Chanel he also served as head football coach for four years with three winning seasons. Coach Lynch began the baseball program in 1970 serving as the head coach for six years. During this time he took on duties as athletic director. During his tenure as Chanel’s head basketball coach, Coach Lynch would be named the Greater Cleveland Coach of the Year three times.

In 1991, Coach Lynch moved to Strongsville High School as its Athletic Director where he served until retirement in 2013. While at Strongsville, the Mustangs added programs for both hockey and swimming to the existing fourteen other athletic programs, and worked on the building of Pat Catan Stadium. Under his supervision as athletic director Mustang teams won four State Championships along with eleven Pioneer Conference All-Sports Awards. In 1998, Coach Lynch added the duties of varsity boys basketball coach to his athletic director duties which he would continue until his coaching retirement in 2014. Coach Lynch was also able to achieve his dream of coaching his son Owen during this time. Coach Lynch’s Strongsville teams would compile a 210-116 record, bring Coach Lynch’s overall record during his head coaching career to 533-296.

Some combined honors from both schools include: four-time Greater Cleveland Coach of the Year, Greater Cleveland Coaches Golden Deeds Award, Hall of Fame honors at both Chanel and Strongsville, eighteen Coach of the Year Awards at both schools, North-South All-Star Game Coach, Ohio All-Star Coach vs Pennsylvania All-Stars, Camp Director at Borromeo, Brad Daugherty and Ron Harper basketball camps, Northeast District Board Member, and his two top awards of the Sportsmanship, Ethics and Integrity Award from both the Northeast District Board and the Ohio High School Basketball Coaches Association.

All of this was possible for three important reasons. Coach was blessed to have the support and knowledge of tremendous assistant coaches, many who went on to be head coaches at both the high school and collegiate levels; players who loved to play in competitive situations; and most importantly a loving and supportive family of his late wife Mary; children Beth, Erin and her husband Dale, Kathy, and Owen; grandchildren Reily, Allie, and Ryan, brother Dave and his wife Peg, and wife Maureen.