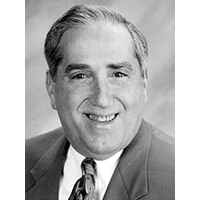 The number of coaches in Ohio High School Basketball who have attained 600 victories can be counted on one hand. On December 20, 1998, playing against Chaminade-Julienne, Joe achieved that milestone. Not many coaches have spent their entire career at the same high school. At Archbishop Alter, starting in 1964, until the present (34 years), Coach Petrocelli has average 17.6 victories a year. Many of those years were when high school were only allowed to schedule 18 games during the regular season. Many of his season were extended by as many as eight games by advancing to the State Finals.

Joe graduated from Purcell High School in 1956. He received a BS degree from Xavier University in 1960 and his Master of Arts there in 1968. He is a retired Lt. Colonel in the Army Reserves and has been married to his # 1 fan, Marianne, for 37 years. She missed only two games during his career. Their children are: Mary Jo Petrocelli, Suzanne Shorter, and Tony. Mary Jo is a reserve girls' basketball coach at Beavercreek High School with over 200 victories, Suzanne's husband is Greg, and Tony played for Joe from 1981-1984.