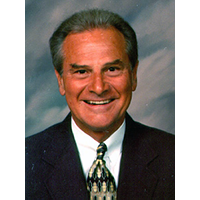 For thirty-six years, John "Butch" Rossi dedicated himself to a career in education. Throughout this career, he served as a highly regarded teacher, coach and administrator. When Bishop Fenwick High School opened in 1952, he became a member of the school's first graduating class. He returned to Fenwick as a faculty member in 1958. Over the next 36 years he held every position of responsibility in the school: classroom teacher, dean of discipline, director of athletics, assistant principal, and in 1989 became the school's first lay principal.

Butch developed a special affection and unique success with the student-athletes who had the privilege to play for him. His coaching career included football, track, tennis and baseball. In 1978 his Fenwick Falcons baseball team qualified for the state finals. When he was appointed Athletic Director in 1965, the school began its emergence as an athletic presence in the Southwest District and throughout Ohio. The Falcon athletic teams have been crowned state champions in four separate sports - football in 1973 and 1974; baseball in 1974 and 1981; boys basketball in 1982; and girls track (Division III) in 1993.

It was in basketball, however, that Rossi demonstrated his remarkable range of skills and abilities when working with players. Over the course of 31 season, he led Fenwick to a record of 402 wins and 282 losses. His teams were regional runners-up on three occasions and won seven district titles, in addition to the 1982 state championship. In 1985 he was named the Class A Coach of the Year. Coach Rossi never shied away from scheduling tough teams for his squad. Most years his schedule was loaded with teams in larger divisions than Fenwick.

For many years he served Southwest Ohio and the Ohio High School Athletic Association community and the state through his involvement in service projects and various boards. In addition, he has been District 15 representative to the Ohio High School Basketball Coaches Association, serving as president of the group from 1976 through 1978, and as editor of Hooplines, the coaches' newsletter. The Fenwick community renamed the school gym the John "Butch" Rossi Gymnasium in honor of his achievements and his dedication to Bishop Fenwick High School.

His coaching philosophy was to asked the Fenwick players to work and play hard, to be dedicated to being the best person they could be, both on and off the floor. Teaching of fundamentals is the most important aspect of coaching.

Rossi was named to the Butler County Sports Hall of Fame and the Butler County Softball Hall of Fame. He belongs to Holy Family Parish and the Knights of Columbus. He married Mary Ann Swarcz in 1961, and together they have raised their ten children: John, Ann, Teresa, Joe, Peg, Liz, Mary, Stephanie, Steve and Andrea.