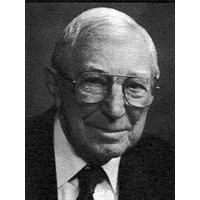 Coach Wickline's distinguished coaching career began at Rio Grande High School in 1937, where he coached football, basketball and spring sports. Beginning in 1942, he took a three-year hiatus as an operator at a TNT plant near Point Pleasant, re-entering his teaching career and coaching at Oak Hill. He remained there fifteen years. At that time, his building became part of the Gallipolis City School District, and he remained as principal at Rio Grande Elementary until 1963. That year he began teaching at Kyger Creek High School, and served as basketball, baseball and assistant football coach. For five years, he was Kyger Creek's principal, and returned to teaching two years before retiring.

Wickline's overall record in basketball was 339 wins and 197 losses. His teams won 14 league titles, one district championship and 12 county league crowns. During his career, Coach Wickline served as a member of the Southeast Ohio Athletic Board on the Ohio High School Athletic Association Board of Control. Following retirement, he was elected to three terms on the Gallipolis City board of Education. He served 10 years on the Rio Grande City Council.

He own education began in a one-room school. He graduated from Rio Grande High School in 1930, and received his teaching certificate from Rio Grande College just two years later. After attending The Ohio State University for two quarters, Wickline took his first teaching job at Childer's one-room school. Enrolling at Olivet College in Michigan in 1936, he graduated one year later. He earned his Master's Degree from Wyoming University in the 1960's.

John Wickline and Mildred Davison were married in 1937, and had one daughter, Deanna, now married to Griff Cook. He has two grandchildren and three great-grandchildren. His wife died suddenly in 1980, and in 1987 he married Genewth Wells Hairston. He is a lifelong member of the united Methodist Church, and recently received an award as a 50-year member of the Centerville Masonic Lodge #371.

His main philosophy of coaching was to teach players the will to win. He often said that players who weren't the best physically "could do their share if they had the desire."