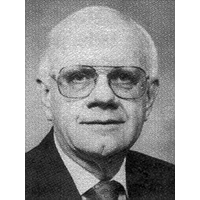 After 38 years of teaching and coaching, John Woolums retired in 1980. Coach Woolums enjoyed a fulfilling career in education, served as a leader in community activities, and promoted basketball through lectures, clinics and state leadership. In overview, his teams won 451, losing just 209. His career began in New Vienna in 1942, followed by stints in Martinsville and Lemon-Monroe. After twenty-five years at Dayton Roosevelt, he coached at Dayton Colonel White, Massillon, and Miami Trace before retiring.

At Dayton Roosevelt, Woolum's teams were city champs ten times, winning district championships in 1960 and 1964. The 1960 team went undefeated, winning the state championship. From 1958 until December of 1960, his teams won 57 and lost 1, winning 46 consecutive games, and had an undefeated season during that time. His teams were in the district finals eight times during that span. In 1960 he was chosen Coach of the Year by UP, AP and OHSBCA. That year he also coached the All-Stars in the North-South Cage Classic. In 1971 and 1972, he coached the All-American Team in the All-Star Game in Dayton.

He organized and directed the Dayton's Ohio Buckeye Basketball Clinic for two years; organized and directed District 15 of the OHSBCA, serving as Vice President, President and on the Executive Board, and later served on the Ohio High School Athletic Association Executive Board. He also organized the Greater Dayton All-Star Basketball Team. Woolums was a respected presenter at basketball clinics and banquets, and had a radio sports program and television show. From 1980-86 he was owner and manager of Buckeye Driving School and a certified instructor of the National Safety Board.

Various honors included resolutions from the Ohio House of Representatives in 1961 and 1977, Alumni Citation from Wilmington College, induction into the Naismith Memorial Basketball Hall of Fame, and in 1991, recognition from the Ohio Senate.

Coach Woolums served in the US Marines, graduating from Belfast High School and Wilmington College, and receiving his Masters degree from Miami University. He has been active in many teachers' organizations on the state and national level, and is currently a member of the United Methodist Church in Hillsboro, Free and Accepted Mason, Scottish Rite, Antioch Temple, Elks and Hillsboro Lions Club. He is married to Nancy Jane, who was a public school guidance counselor for 35 years.