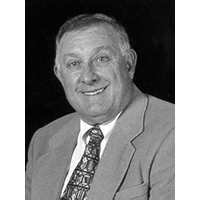 Larry Clark is the winningest coach in Perrysburg's history with 307 wins and only 177 losses in his 22 years as head coach. Overall in his 34 years of coaching, his record is 442 wins and 236 losses. His two 20-0 seasons in 1979-80 and 1980-81 saw him lead the Jackets to the first regional tournament in the state boasting of four undefeated teams. An excellent student in his own right, Clark earned All-State honors in 1958 while at Gnadenhutten High School. After graduating, "L.C." went on to letter four years in baseball - playing both as a pitcher and shortstop, three years in basketball and one year in track at Wilmington College. In 1993 he was inducted into the Wilmington College Hall of Fame and in 1997 into the Perrysburg Hall of Fame. Upon graduating from Wilmington in 1962, Clark taught at North Ridgeville High School and became and assistant coach in football, basketball and track. In 1965 Coach Clark took the head boys basketball position at Lincolnview High School where his teams recorded 134 wins in nine seasons. In 1974 Larry was appointed head coach for the Yellow Jackets. Coaching highlights for "L.C." include: two consecutive undefeated seasons, forty consecutive regular season wins, five NLL championships, five time NLL Coach of the Year, in 1974, 80 and 91 Sectional and District Champions, District 7 All-Star game coach in 1980, 81, 84, 85, 86 and 89, District 7 Coach of the Year in 1981, Wood County All-Star game coach in 1980 and 81, and selected as a coach for the OHSBCA All-Star game in 1992. He served as Vice President of the District 7 Basketball Coaches Association for 12 years and co-directed their All-Star game five times. As a member of the Perrysburg Alliance Church over the past 25 years, Coach Clark has served as a trustee, an usher, and a senior high Sunday school teacher. He contributes his success to the dedication of his wife of 35 years, his exceptional coaching staff, athletes and students with whom he has been associated with. His family includes his wife, Karen, son Michael, daughter-in-law Annemarie, grandson Adam and daughter Maribeth.