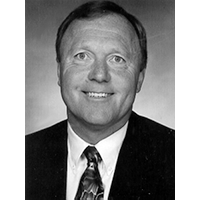 Coach Holden’s teams were known for their tough match-up defense and league opponents dreaded that aspect of competition when playing Beavercreek. In the 1998-99 season Beavercreek’s regular season record was 20-0.. They were the only Division I team in Ohio to go undefeated during the regular season that year and had the best record in the history of Beavercreek basketball. Their final record was 25-1.

Beavercreek’s biggest win was during the 1987-88 season when they defeated Dayton Dunbar in the Sectional Finals. Dunbar was ranked #1 in the state and #6 in the nation. The game was played in front of 12,000 people. Dunbar won the state the previous season and had four returning starters.

At one time Beavercreek had won 46 in a row at home over six seasons and 69 of 71 over eight seasons. During his tenure at Beavercreek Larry’s team had a winning record against every team in the Western Ohio League.

Larry was head baseball coach at Start High School where he won two sectional titles and head golf coach at Beavercreek and won three league titles. One of his golf teams finished sixth in the state.

Larry has been married to his wife, Pat for 33 years and they have three sons, Brett, Todd and Jamie, which all three played for Larry. They are active in the Church of Christ in Beavercreek.