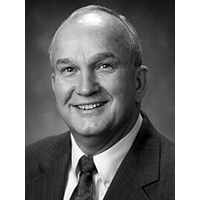 Coach Larry Wilson may be an "ordinary man" but he will long endure as one of the greats in Ohio High School Basketball. He spent 27 years in coaching at Westfall, Whitehall, Lucas, Fairless, and Perry, where he amassed an overall record on 374-198. He spent 18 years at Massillon Perry, winning 279-118 (70%). In his career, he won nine conference titles, 14 sectional, three district runner-ups, one district, and one regional championship. In 1991, Wilson's last coaching year, Perry was in the Final Four.

He was honored numerous times with Coach of the Year honors: eleven times for the conference, seven times for District 4, eight times for the county, and two times for NEO District. In 1984, he was the OHSBCA State AAA Coach of the Year, and in 1991 was the Ohio UPI Coach of the Year. He coached the OHSBCA North-South All-Star Game in 1985 and the Ohio-Michigan Game in 1993. He has published fourteen basketball articles in national magazines and has been a frequent speaker at such prestigious events as the National Physical Education Convention in Law Vegas and Kansas City, and the Indiana-Kentucky All-Star Game. He also served as a visiting coach in Colima, Mexico.

He has been an OHSBCA member since 1964 and maintained memberships in OEA, NEA, SCCA, NFICA, and NABC. He was the OHSBCA District 4 Director for 16 years and is presently the OHSBCA Public Relations Director, Hooplines Editor and historian, and Commissioner of the Canton Nike Basketball League. He has served as chairman of various departments at Perry and is currently the Department Chair for the Work/Study program. In 1994 and 1996, he was selected on of the "Top 25 Outstanding Educators" at Perry.

Coach Wilson and his wife, Mary Claire, have three sons: Robert, Anton, and Ralph, married to Susan. Larry and Mary are members of St. Clement's Catholic Church in Navarre. He graduated from Westerville High School in 1959, Otterbein College in 1963, and received a Master's Degree in 1968 from The Ohio State University.

His coaching philosophy was that "There aren't any great men. There are just great challenges that ordinary men like you and me are forced by circumstances to meet." This quotation from Admiral William F. Halsey hung in the Perry High School gym, commonly referred to as "Larry's gym." He motivated his players, coaches, managers, statisticians, and students with this philosophy, encouraging them to defeat adversity with strength, to face obstacles with determination and to meet every challenge with 100% effort.
For his players, loyalty, commitment and fighting spirit were a constant.