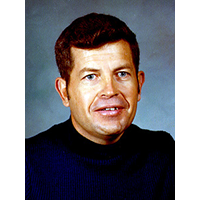 Coach Himmeger coached at three different schools for a total of 33 years, with 24 at Ayersville High School. His 527 victories are among the most in the history of the State, with a winning rate of 70.4% - 413 wins at Ayersville, 90 at Upper Sandusky, and 24 at Zanesville.

Himmeger graduated from Delphos Jefferson High School in 1952 and from Findlay College in 1956. He served as President of the OHSBCA from 1966-68, as a Director of District 7 for eight years, and as a football official for 20 years. His personal honor include Class A Coach of the Year in 1961 and 1962; Co-Manager of the North-South Cage Classic for thirteen years; coach of the North team in 1962 and 1977; Findlay College Hall of Fame in 1972; and coach in the Dapper Dan Classic in 1982. He retired from coaching in 1990. His responsibilities at Ayersville included serving as Principal for twelve years, Athletic Director for 23 years, and Summer Program Supervisor for 24 years. In addition to coaching basketball for 33 years, he coached baseball for 23, track for ten, tennis for four, and golf for seven years, with three state teams.

Amazingly his teams had three undefeated seasons, won 65 regular season games in a row, and 58 consecutive games. Most coaches hope to reach the State Tournament sometime during their careers. His teams qualified three times and won it all twice, 1957 and 1961. He recorded 20 sectional championships, six district, and three regional championships. One of his former assistants said about him, "I was able to see the positive results and influence that Coach Himmeger had upon young people he worked closely with. Every young man who had that opportunity to participate in a program run by him was provided the opportunity to grow and develop into a productive citizens through the lessons taught on and off the court.

His coaching philosophy was "Success only comes to one through the united efforts of others. Many were there for me, my family, my players, my associates. My philosophy is very basic. Give the student-athletes the basic needs for the game of life - scholarship, leadership, character, and service. Put them together with the four D's - Discipline, Dedication, Determination, and Desire. It's what you give of yourself so others will benefit. I can't, but we can. Teamwork will get the job done."

Coach Himmeger and his wife, Billie Jo, have four children: sons Bernie and Brad, and daughters Jody Sullivan and Julie Thompson. Their grandchildren are Rachel, David, Elizabeth, and Jacob Himmeger, and Taylor Thompson. Lee and Billie Joe are members of the Trinity United Methodist Church in Delphos.