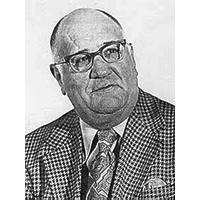 Lee Zierolf was a rare two-sport coach for more than two decades, and highly successful in both football and basketball. However, his greatest accomplishments came in 21 years as the basketball coach at Sandusky St. Mary's where he compiled an overall record of 339 wins and 75 losses. He won 82 percent of his games. As 1927 graduate of Holgate High School, Zierolf went on to play football at the University of Dayton and graduated four years later. Coach Zierolf came to St. Mary's at the start of the 1932-33 season and remained at the school until January 1935 at which time he resigned to accept an administrative position at Sandusky hospital. In 21 regular season games, Zierolf-coached teams lost two games or less on 15 occassions. St. Mary's played between 12 and 17 regular season games during Zierolf's era. The 1949-50 team was undefeated at 17-0 and seven other teams had just on loss in season play. Seven more teams lost only two games before tournament play. St. Mary's had only one losing season under Lee (7-9 in 1951-52). His basketball teams had an outstanding tournament record of 75-24 that included four trips to the state tournament. The 1935-36 St. Mary's team won the Class B State Championship and the 1938-39 squad was runner-up in the same classification. St. Mary's also reached the state in the 1939-40 and 1944-45 seasons. His teams won six district championships. Zierolf coached the school's football team for 22 seasons and was 98-15-10. The 1934 team was 6-0 record and did not allow a point scored against them. The 1935 team opened with six more shutouts to run the streak to 12. That team finished 7-0-1. Zierolf was also a city commissioner in Sandusky for several years in addition to his duties with the hospital. He and his wife, Charlotte had two children, Barbara and Lee Jr. They all are deceased. They have a grandson, Joe, who lives in Houma, Louisiana with his family.  James Armstrong of Huron will accept the award on behalf of his late father-in-law.  Zierolf's trademark was to take young men and not only form their lives as students and athletes, but to prepare them well for the future.