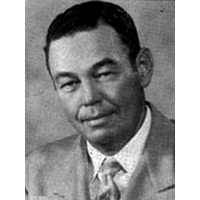 MAGELLAN HAIRSTON OF THE WATERLOO WONDERS

Buckeye basketball became newsworthy and popular with the Waterloo Wonders from Rio Grande, coach by Magellan Hairston. The Wonders won the Class B State Championship in 1934 and 1935, with a record of 97 and 3. Many of the games were against Class A teams and some opponents were college teams!

Hairston began coaching at Mason in 1927. In 1929 he coached at Waterloo, then at Windsor in 1930 and 1931. He returned to Rio Grande, coaching there all but two year through 1946. (Note: Consolidation first combined Mason and Windsor, then Waterloo, all now combined with Rio Grande.) The lives of the Wonders and their coach came together in the village of Waterloo, home to approximately 150 people in 1935. Basketball became a focus of community pride and a way of life in Lawrence County.

Center stage of the Wonders were a hearty half-dozen: Coach Magellan Hairston, a 26 year-old with an easy smile and a firm handshake; Orlyn Roberts, 5' 11" master ball handler and showman; Wyman Roberts, 5' 10" forward who whipped the basketball around faster than the eye could follow; Stewart Wiseman, 5' 7" guard from nearby Sheritts who ranged as backcourt watch dog; Curtis McMahon, a 5' 11-1/2" center from Greasy Ridge whose accurate shooting was learned on an outdoor court where missed shots rolled 330 years into a hollow; and forward Beryl Drummond, a 5' 8" second-string transfer student from Cadmus.

Hairston molded these players together, teaching them that defense and team play were more important than individual scoring and headlines. A perfectionist, Hairston also knew a reprimand from other squad members was much worse than any scolding he might give. The Wonders held "kangaroo" court for team rule violators and laid down the law. Playing basketball meant too much to them. In 1935 discipline paid off: Waterloo Wonders placed four players on the all-tournament team.

Magellan Hairston graduated from Rio Grande College, doing additional work at The Ohio State University. He and his wife, Genewth, had three children: George, June and Alice. George is the only surviving offspring, and there are nine grandchildren. (Genewth later married John Wickline (Hall of Fame, Class of 1994). After his coaching career, Hairston became a school administrator and then a successful car salesman. He was also an active member and supporter of his community and a member of the Masonic Lodge.

"The legend lives on. How good were the Wonders? How would they match up with today's teams? Comparisons are difficult, if not impossible. But one thing is certain. They were the best of their day - and that is the only true measure of any athlete."