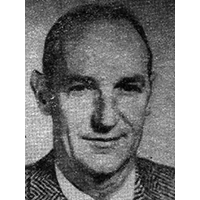 One of the founders of the OHSBCA and a primary founder of District 11. Max devoted his entire coaching career to Newark High School, 1942-57, with the exception of the year 1944-45.

During his career, he established a record of 240 wins and 86 losses. In addition to numerous league and tournament titles, Max led the Wildcats to a state title in 1943.

Max graduated from Frazeyburg High School and played collegiate basketball at Dennison University. He is a member of the Newark High School Hall of Fame and served as President of the OHSBCA in 1956. Max's wife Emily S. Douglas is deceased but has a daughter, Diana Tomlinson, living in Minneapolis, Minnesota.