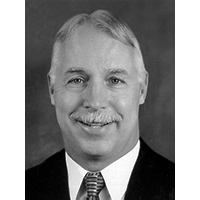 Paul Highnam graduated from Mt. Vernon High School in 1968 and from Toledo University in 1973. He played football, basketball and baseball in high school. Paul attended Toledo on a football scholarship and also played one year of basketball and baseball in college. His teaching duties during his career included physical education, learning disabilities, OWE coordinator, health, work-study coordinator and assistant athletic director. In addition to basketball, his coaching experience included assistant football for seven years, baseball for one year and track for two years.

Coach Highnam attributed three reasons why his teams were successful. The work they did on fundamentals with their fourth, fifth and sixth grade players, the amount of time they spent on man-to-man defense each day in practice and the break down drills we did to work on all aspects of the game.

Paul is married to the former Jennifer Lynn Walker and the have three children, Kelli age 21, Molly age 18 and Sam age 12. They attend the Mt. Vernon Presbyterian Church.