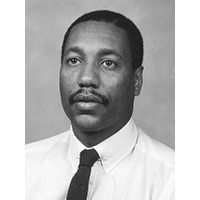 Perry's career was cut short by his untimely death due to cancer. But he set an amazing record of achievement during his lifetime. He began his coaching career at Guernsey Catholic High School from 1979-1983. He then became an assistant coach at Berlin Hiland for one year before being named head coach there in 1984. His last season was the 1999-2000 season. His teams at Hiland won 304, while losing on 85; thus winning 78.1% of their games.

Perry was a graduate of Canton Timken High School and Muskingum College. He was selected as a National High School Coach for representing that group at a camp and coaching clinic in Leeds, England in 1983.

Coach Reese was a man whose professional career transcended race and religion. He pushed players to perform at maximum efficiency. Those who went through his program developed and undying love for the coach. That love was reciprocated for he would do anything for his kids. Perry was well respected by the entire community and by his opponents as well. He was a credit to the coaching profession. He represented the virtues of teaching and education.