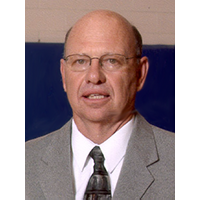 Being the son of a coach and possessing a passion for basketball, it was no surprise that Rob Sheldon became successful in his chosen profession.

Rob graduated from Elyria High School in 1969 where he lettered in basketball and baseball. After graduation, he attended Bluffton College where he was the starting point guard for three years and also played baseball.

Rob started his teaching and coaching career in 1973 at Ottawa Glandorf High School where he coached basketball and football. After being an assistant for two years, Rob wanted to become a head coach and was afforded that opportunity at North Central High School in Pioneer. Rob’s stay at Central lasted four years. In his fourth year, he led North Central to its first regional appearance in the school history and finished his for years with a record of 49-39. It was again time to move and he got an opportunity to coach at Wynford High School in Bucyrus. This was a school with a winning tradition but had not advanced to a Regional Tournament. Just like North Central, it did not take long. Rob’s 24 year record at Wynford was 401-156. His teams won 9 League Championships, 18 Sectional Championships, 7 District Championships, 2 Regional Championships and his 1987-88 team finished as State Runner-up and he was named the Class A Coach of the Year. He also won many District and County Coach of the Year Awards during his reign.

Rob’s teams were characterized by being fundamentally very sound, both offensively and defensively, and very well prepared for every opponent. His teams’s ability to focus on one possession at a time was one of his trademarks.

Coach Sheldon was also very active in the Ohio High School Basketball Coaches Association. He served as District 6 Director from 1983-85. He was an officer in the OHSBCA for ten years, serving as President from 1994-96. In his 28 year career Rob has coached virtually every All-Star game the OHSBCA has sponsored. These include the North-South Game, the Ohio-Michigan Game and the Wendy’s Classic. In 1998, Rob was elected to the Elyria Sports Hall of Fame and on March 24, 2003 he received the prestigious Paul Walker Award in his last year of coaching.

Rob retired after 30 years of coaching with an overall record of 450-195. He is currently Assistant Principal / Athletic Director at Wynford High School. He and his wife, Brenda live in Bucyrus and have six sons, Josh, David, Chris, Michael, Robbie and Todd.

Rob and Brenda have property outside of Pinehurst, NC and are looking forward to a golfing retirement.