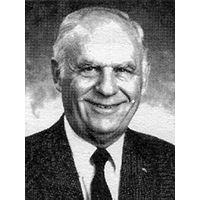 Coach McClary graduated from Copley High School in 1945 and Bowling Green State University in 1949. His coaching includes 32 years, three at North Royalton, three at North Robinson, 24 at McDonald and two at Howland Christian.

In addition his teams won numerous County, League, and Mahoning Valley Coach of the Year Awards. One of the best seasons was 1964-65 when McDonald was undefeated, winning 22 games before losing to the eventual state champions. Included in that season was a victory over North High, the Youngstown City Champs. From 1964-74 his teams won 184 and lost 47 for nearly a 80% win record, 6 ICL league titles in 7 years.

Coach McClary has two sons. One a coach with over 200 victories, and the other a gastroenterologist. Both daughters-in-laws were teachers and girls' basketball coaches. He has four grandsons and one granddaughter. Wife Jean, is a retired teacher and both are active members of the United Methodist Church. He has served as a member of the McDonald Board of Education for 8 years.