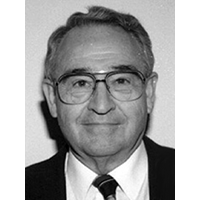 It it very unusual today to coach for 31 years, especially at the same school for the entire span of years. Coach Stan Kirby did just that, coaching basketball 31 years at Marion Pleasant High School, as well as baseball and golf during his tenure there. His teams in basketball won 69% of their games, with a total of 464 victories. His teams won twelve league, ten sectional, four district, two regional and one State Championship. They were district runner-ups in 1957, 1964, 1967, and 1972; regional runner-ups in 1974 and 1985; and state runner-ups in 1971, in addition to the championships. They won it all in 1973.

Kirby received Class A Coach of the Year honors in 1973-74. In 1973 he had the thrill of an undefeated season, going 26 and 0, and coached the North-South All-Star Game.

He graduated from Prospect High School and Ohio Wesleyan University. He has been a member of OHSBCA for more than 20 years. Also he is a lifetime member of the America Legion Post # 368, having served two years as an Aviation Cadet during World War II. He is a past member of the Marion County Children Services board; a charter member and deacon of 40 years at Calvary Baptist Church in Marysville; a rural mail carrier in Prospect for 23 years. He established the Stan Kirby Realty in 1982 with his office in Prospect. He and his wife, Colleen, have six children: Karen, Linden, Carole, Mark, Eileen, and Kathleen, and 13 grandchildren.

His coaching philosophy was spend time analyzing and organizing, so practices are efficient and productive. In a smaller school, study the strength and weaknesses of each player an adjust the offense and defensive styles to suit their capabilities, rather than try to make the players fit your personal style preferences.

His philosophy of coaching embodies the basics that any successful coach should employ. His approach to practices and adapting to his players strengths were hallmarks of his career. He also said that "I was privileged to have two great assistants in Bob Gucker and Doug Lichtenberger and the support, prayers, and backing of my family."