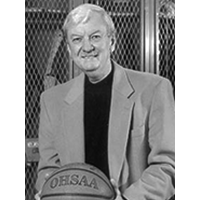 Coach Steve Smith graduated from Shelby High School in 1964 where he lettered in football, basketball and baseball and was MVP in basketball. Upon graduation he went to work at the Ohio Steel Tube plant in Shelby as an overhead crane operator. In 1966 he enlisted in the U.S. Navy. After serving three years, including a one year tour of duty with the Seebees in DaNang, Vietnam, he returned home to begin his college education. He returned to the steel mill and attended the local branch of OSU part-time until 1970 when he had an opportunity to play basketball at Northern Arizona University. So he packed up with his wife and three year old son, Steve Jr. and moved to Flagstaff, Arizona. In August, 1972, he graduated with a degree in Physical Education and English and also welcomed his second son, Rocky. That same year he began teaching English and was Asst. Varsity Football and JV Basketball coach at Sandusky Perkins High School, Sandusky, Ohio. After only one year as an assistant coach he moved on to Old Fort Where he was Head Basketball and Baseball coach for the next four years. His 1975 baseball team made it to the State. While at Old Fort Steve completed his Masters Degree in Guidance and Counseling from Bowling green State University. In 1977, Steve moved to Orrville, Ohio and became the Head Basketball coach for the next 25 years. He also served as Head Golf Coach for six years. He taught at risk students for 23 years and retired as the O.W.E. Coordinator in 2002. He had the pleasure of coaching both his sons during those 25 years. In 1980, his third year at Orrville, he guided Orrville to the first ever State appearance. In 1992 Orrville won the first State Championship in high school history with a 27-1 record. In 1995 and 1996 Orrville became the only Ohio high school to win back to back State Championships while moving up a division (Div. III in 1995 and Div. II in 1996). Coach Smith compiled a 57-32 record in his 4 years at Old Fort and a 456-136 record in the 25 years at Orrville. His overall coaching record is an outstanding 513-168 and includes three State Championships. His most treasured awards include the Bob Arnzen Award, the Paul Walker Award, and the Akron Beacon Journal Clem Caraboolad Award for Humanitarian efforts. He is extremely honored to have received awards bearing the names of these wonderful coaches. Coach Smith’s philosophy is simple; work hard, play hard, and play together as a team. His teams were well disciplined, played tough defense and played together. He cared about his players both on and off the court. He demanded their best efforts and loved them for it. Coach Smith resides in Orrville with his wife of 36 years, Donna. She has been by his side through it all and is his number one supporter. His son Steve, Jr. teaches Math and is the Head Basketball Coach of the Robinson High School Knights in Tampa, Florida. Rocky and his wife Shelly live in Orrville, where he is involved in the youth sports programs. Rocky’s two sons Alexander, 8 and Luke, 5 are coach’s pride and joy and he looks forward to watching them play in future years.