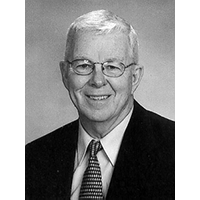 He graduated from Cleveland St. Ignatius High School in 1957 and Bowling Green State University in 1961. He has been an active member of the OHSBCA and served as an office in the District 7 Coaches Association, 7 years as president. Tim's teams won 316 games, 115 of those at Toledo St. John's, where he won a District Championship in 1972-73.

Tim, during his career, coached Tennis (294 wins and 140 losses), cross country, football, track, golf, softball and baseball. He was recipient of the OHSAA Sportsmanship, Ethics and Integrity Award in 1997. He was active in the CYO Leagues in several cities from 1955-79; Scripture Reader and Eucharistic Minister for Corpus Christi Catholic Church from 1990-present. Coach Smith is a Color Analyst for WLQR Radio and for BCSN Cable TV in tennis, softball and basketball. Tim's wife passed away in 2002. They have two sons, Steve and Mike and daughter, Kelley and six granchildren whose names are: Emily, Connor, Lindsay, Lauren, Sharon and Miles.

Coach Smith's belief was to develop the whole player, stressing positive attitude, leadership and teamwork. The player's commitment to the team was the highest priority. These character traits within each player were deemed more important than victories.